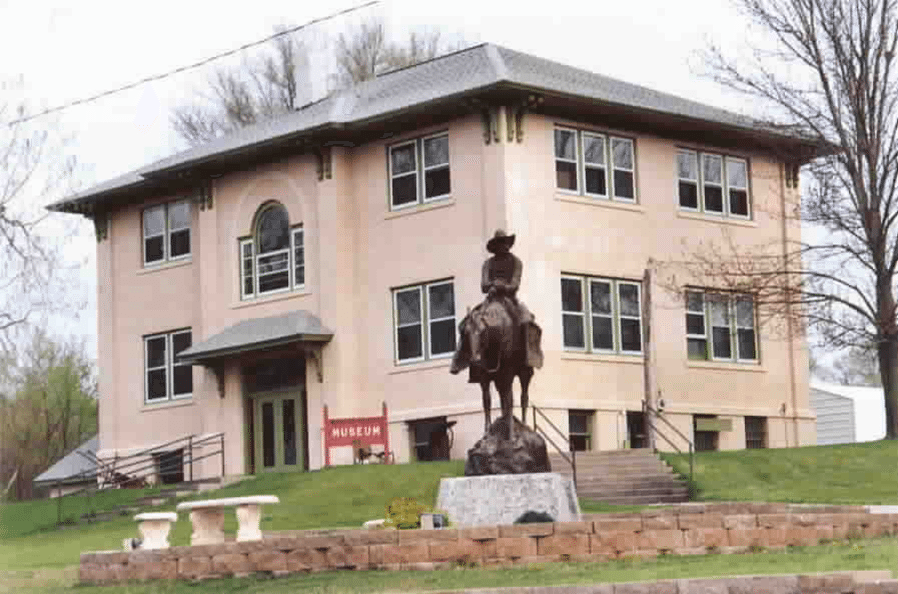 The town of Bartlett, elected county seat in 1885, was named for Ezra B. [Bartlett] Mitchell, on whose homestead it was located. In 1886 nine blocks were surveyed with the center block for the courthouse. Since the first two towns named as county seat had lasted only a few years, there was considerable contention over its actual construction.

E. A. Bohne erected the courthouse in 1888. A $500 fireproof vault was added in 1894 at the insistence of Commissioner Pibel. It saved the county records when the building was destroyed by fire in 1917. At that time, an effort was mounted to move the county seat to the larger city of Ericson near the southern edge of the county. The voters, however, turned down the proposition, and then voted $5,000 in bonds to help build a new courthouse on the square, with Bartlett Precinct also pledging $5,000. Completed in 1920, it was built of hollow-walled, concrete design.

Rev. Barstow, a Baptist, was the first minister at Bartlett. Lewis Richards, the hotel man, donated five acres for a cemetery. Joe Jackson was the first man buried there and Rev. Barstow was the second. In 1908 an association was formed to care for the little cemetery, which at that time was a neglected and dreary spot on the prairie. Money was raised to fence it, build a stone entrance, and plant trees. Now large crowds gather for memorial services conducted by American Legion Post 109 and the auxiliary each May.

The first bank was established in 1890 by James Hall. He moved away in 1894 and, after a short time, it closed. Early in 1906 A. L. Bishop opened a bank that did a flourishing business until 1959, at which time federal charges of embezzlement were filed against Clifford Bishop, son of the founder. A jury found him guilty and he served time in the penitentiary. Since 1959 the village of Bartlett has had no bank.

Early in the 1970s the courthouse was condemned by the fire marshal. In March 1976 citizens met with the county commissioners to discuss the building of a new courthouse. That October a representative met with the three commissioners, but again no decision was made. In May 1980 it was agreed, on a split vote, to review plans and specifications of architect Ed Cable and in July bids were let. A new courthouse was built on the west side of the old one, at a cost of $237,000, and county officials moved to the new building in May 1982.

During the construction, there was much talk of what to do with the old building. Two commissioners wanted to tear it down, however, a group of people wanting to save the old building got together and organized the Wheeler County Historical Society. On July 28, 1981, the society’s officers, Kathleen Sheldon, president, Leo Dwyer, vice-president, and Bonnadel Foster, secretary, presented a plan to preserve it as a museum. The old courthouse now offers our citizens a permanent place to display artifacts from our proud and colorful past, and introduces our children to their rich heritage. It also benefits Bartlett’s economy by attracting visitors.

Until 1912 Bartlett had only a grade school. A state law requiring each county to provide secondary education to students was passed, and a high school was erected in 1914. In 1919, because of the great distances that must be traveled and lack of accommodations in town, a girls’ dormitory was built. This dormitory burned in 1923, but was immediately replaced. In 1930 a boys’ dormitory was added. With progress and constant changes, the county formed a K-12 school system in 1969. A fleet of busses now brings children to school, so the dormitories are no longer needed. There is also an elementary school at Ericson.

Bartlett has two churches, a Lutheran and United Methodist.

The population of Bartlett of was 140 in 1980. In addition to a fine new post office and county offices, there is an attorney’s office, Sandhills Irrigation Company, and half a dozen shops and businesses. A service station also stocks a few grocery items since there is no grocery store.
We think Bartlett is a unique little village. There is no crowding, no smog, no poverty or any great wealth, no crime (so to speak), and probably no great changes to be seen in the way-of-life of our town in the future.