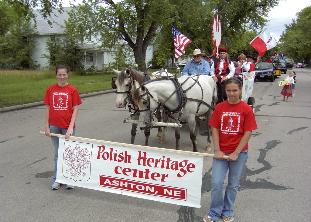 The Lincoln & Blackhills Railroad (later the B&MR) had stations at Farwell and Loup City and needed another stop midway between, for the convenience of the farmers along the line. It is said the site chosen was a prairie dog town not far from Oak Creek. The Lincoln Townsite Company platted the town, naming it “Ashton” for the home town of John P. Taylor, from Illinois.

Even before rail service began in 1887, businesses were flourishing. There was a brickyard, lumber yard, real estate dealer, hotel, grain elevator, two general stores, and livery stables. The bank of Ashton began in 1888. That same year the school and post office were moved from the German settlement of Zeven. Incorporation papers were filed on March 30th, 1889.
In 1906 the “Sherman County Times” reported; “Frank Mills of Ansley and William Elder are putting cement sidewalks all over Ashton, thus making Ashton the second Chicago. Ashton is growing faster than any other town its size.”

The original founders of the town were a blending of Swiss, French, Danes, English, and Germans. When the railroad bypassed the village of Paplin, the Polish businessmen moved to Ashton. Soon the Poles outnumbered all the other nationalities as they do today.

An early settler, trained as a blacksmith, believed that all work made for a dull existence. He dammed up the creek near his home to create a pond, built some boats, and converted his yard into a pleasure garden. To provide fun for the children, he hand carved horses and built a steam-powered carousel. He then added a baseball diamond, bowling alley, and dance hall for the adults. All-in-all, Bill Knutzen provided a recreational facility for the entire community. Knutzen Park flourished for about 20 years and even provided the setting for his son’s wedding. Finally ill health forced him to abandon the enterprise and it was eventually destroyed.

The Polish settlers added to the colorful history of the area by their traditional wedding celebrations. The festivities started by choosing four young men who would go from house to house to deliver verbal invitations. They also acted as masters of ceremonies for the entire affair, leading the wedding party to the church accompanied by a wagon-load of musicians and occasionally firing their pistols to add to the din. The cavalcade was quite large since the bride might have 20 or more bridesmaids. The entire family and friends completed the procession.

After the ceremony, the newly-wedded couple returned to the bride’s home to partake of bread and salt to symbolize that necessities would not be lacking during their married life, then hosted a lavish wedding dinner, immediately followed by dancing. To dance with the bride, prospective partners needed to break a plate with a large coin, which became the property of the bride. Later in the day, the bride changed her gown and donned a small cap and apron to signify that she now assumed the duties of a housewife. The dancing continued the entire night. No wonder the shoe repairman became an essential part of a Polish community.

Ashton continued to grow and prosper. In addition to a flour mill and the usual shops and businesses, Ashton had a butter and cheese factory, two churches, a public and parochial school, and an opera house. The Depression in the 30s caused one of the two banks to fail, and several businesses to close.

Ashton’s population peaked at 488 in 1940. The ease of transportation and the lack of job opportunities forced many residents to move. The 1980 population is recorded at 273.

Ashton has a post office and a good variety of stores and businesses. The community supports a good volunteer fire department with EMT unit, and two parks; the Legion Park in the heart of town and Roosevelt Park in the outskirts. Centennial festivities are scheduled for June 30-July 1-2, 1989.

Train service was discontinued in 1985, and the tracks were removed the next year, so the “Second Chicago” remains a small Nebraska village.

Visit Ashton on the World Wide Web at http://www.polishheritagecenter.com/