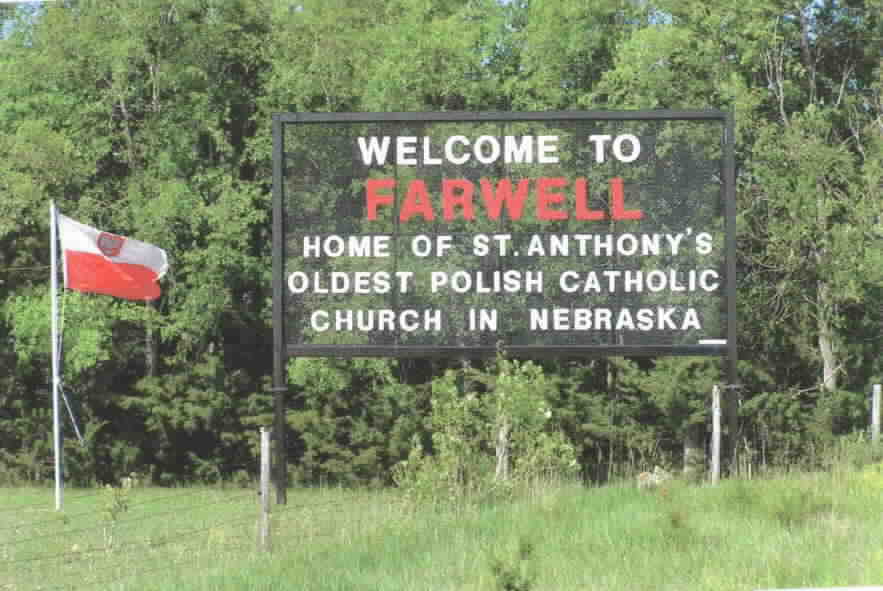 Our town was started in 1887 by Polish immigrants and called “Posen.” Located on a five-acre tract in the lowlands northwest of the present town site, it consisted of four or five businesses and a few residences. Two years later, because of concern for this nationality identity, a petition was circulated to have the name changed. A Danish word “Farwell” was chosen, which means “good-bye,” (good-bye Posen!)

A few years later, flood waters and a disastrous fire caused the citizens to reconsider its location. The hill to the south and the land beyond happened to be owned by the Lincoln Land Company. The company offered to move all the buildings if the town would re-locate. (The fact that the Burlington Railroad had built through the area and its depot was completed in 1887 was, of course, more than coincidental.) Their offer was accepted and by 1893 all the remaining buildings and homes in the old town were moved to “the hill.”

The village incorporated in 1895 and while the post office and depot used the name “Farwell,” village business was conducted by the board under the Posen name. Later, this caused considerable confusion. In 1951 the District Court of Howard County finally took action, designating the name of the town to be Farwell.

Charles Dobry, James Lang, and Fred Olsen served as the first school board, with a building completed in 1892. Farwell got a new school in 1950, at a cost of $85,000. When enrollments declined in 1968, the high school closed, but the elementary school continues to serve the community.

St.Anthony’s Catholic Church is the oldest Polish parish west of the Mississippi. It was organized in 1887 about two miles south of Farwell. In 1924 the church was moved to town and the following year a brick parochial school was built under the supervision of Rev.Joseph Hinzman. The school closed in 1967, but the parish continues to serve 80 families under the guidance of Fr.Tom Ryan. The Lutheran church, organized in 1898, was moved to the museum in St.Paul in the late 1960s.

A volunteer fire department was started by P.J.Sazama, cashier of the First State Bank of Farwell, in 1924. The Farwell Irrigation Project headquarters buildings are located adjacent to the village in the southwestern part of town. The site is the homestead of Niels Larsen.
The population was as high as 300 in the 1930s, but presently stands at 170. The depot and railroad are long-gone, but Farwell still has a post office, elevator, bank, cafe-bar, and a number of other businesses and stores. The centennial celebration in 1987 brought people “back home” from as far away as California and Florida. A crowd of more than 1,400 enjoyed the event as did the citizens of Farwell who worked to put it together.

From material written by Frank and Sabina Sazama and submitted by Marlene Wolinski, Farwell, NE 68838.

Visit Farwell on the World Wide Web at http://www.farwellne.com/.