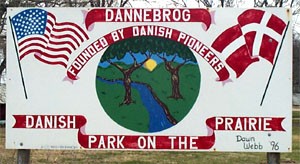 Dannebrog was founded in the mid —1880s by a band of Danish migrants who hoped to make Howard County a new Denmark.

They built their new town in a sheltered bend of Oak Creek, just a mile from the beautiful Loup River. There were less than 20 settlers then and just over the hill to the south were nearly 300 Pawnee Indians camped by the River.

They named their town Dannebrog, the romantic name for the Danish flag.

Still today, Dannebrog reflects its Danish heritage. The Danish flag the Dannebrog still flies daily on main Street and in Dannebrog Cafes, you can still enjoy the Old World tastes of Rullepolse, Aebleskivers Soups and Pastries.
Current population is 352.

Visit Dannebrog on the World Wide Web at http://www.dannebrog.org/