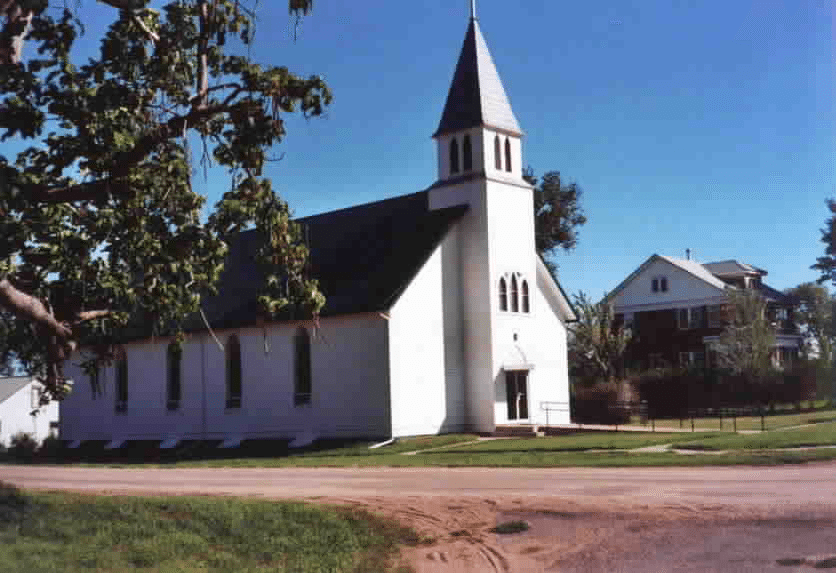 Oconto, in the Wood River Valley, was on the Kearney & Black Hills branch of the Union Pacific Railroad, one of the most prosperous, best-paying branch lines. No longer operating, the depot was moved to “Railroad Town” at Stuhr Museum in 1965, and the tracks were removed in 1985.
Started as “Olax” on the Plum Creek (Lexington) route, William Henderson opened a post office in 1880, then moved to this site when the railroad came through. Lewis Wambsgan ran a livery stable and started an annual turkey shoot, famous among early settlers. The town site was purchased in 1887 from Wallace Highbee by the Wood River Improvement Company, and the name changed to “Oconto.”

In 1896 a vote moved the District 34 school a mile out of town. This displeased the townspeople so District 256 was formed. The two-story building that swayed in a hard Nebraska wind, burned in 1908 and was replaced. The class of 1932 was the first to graduate from high school. The present school was built as a WPA project in 1938. The high school closed in 1978, but K-6 classes are still available locally.

Three churches have looked after the morals of the town: the Catholic, started in 1889; Episcopal, in 1890; and Evangelical (now United Methodist), in 1901. There was a Church of Christ, and a Seventh Day Adventist church and school north of town in 1906.

In 1904 the rail services consisted of a “tram” (carrying both freight and passengers) every day except Sunday. Beginning the next year, motorcars were used so shoppers could make the trip to Kearney and back in one day. All this ended in 1955.

The community incorporated in 1906. Oconto was a “forest of 232 windmills” often called the “Windmill Town.” Editor Bryner, who established “The Oconto Register,” pushed for a water system, warning people they would be sorry when it was too late. A vote on the issue lost by two votes in 1911. A costly fire in 1914 still didn’t move them, nor did one that burned three businesses in 1927. The water system was not installed until 1935. A sewer system was established in 1962 and the streets oiled in 1965.

A ball park was established in 1913 with a covered amphitheatre. An opera house was built in 1915, where dances, plays, and basketball games were held, and movies into the 1950s. A golf club was organized in the 1920s.

Electricity arrived in 1918 when the “Register” announced, “Oconto can boast of having a real electric light plant. The final adjustments were made the fore part of the week, the ‘juice’ turned on…the streets are lighted and now Oconto takes on a metropolitan appearance.” After the McNulty Light & Power plant burned in 1927, a franchise was given to the Nebraska Public Power Company, which was purchased by Custer Public Power. There were two telephone companies in 1908. Mrs.Rorinette seems to have been the first “hello” girl.

Almira Boblits was perhaps the first woman mayor in the state. Elected to the village board in 1928, she became the chairman (mayor) in 1931.

An attempted bank robbery was foiled in 1921 when George Winkerman observed some men in an unfamiliar car acting suspiciously. He alerted the town by ringing the fire bell, and scared them off. There was no night watchman around when two robbers knocked at Frank Devine’s door in 1974, tied up his wife and daughter, and forced him to open the bank door. The bandits were caught and convicted.

In time of war Oconto was well represented by its best young men, an active Home Guard, and headed the list for Red Cross and bonds. During the 1940s, Oconto women helped serve home-cooked food at the North Platte Canteen.

The town’s newspaper died in the 1920s. The population of Oconto has fluctuated over the years with the 1989 figure at 150. The town still has a post office, a bank, cafe, beer parlor, and a half dozen other businesses.

Many hours of planning went into Oconto’s centennial observed July 4, 1987. Over 1,000 people, including Governor Orr, Senator Lamb, and Jeff Kirkpatrick, enjoyed a free lunch and birthday cake. There was a horse shoe tournament, turtle races, souvenirs, quilt raffle, a dance on the tennis court, and melodrama “Deadwood Dick” to complete the festivities.
Traditionally the first Saturday in July is when Oconto High Alumni come home and enjoy dancing, a parade, and other frivolities at their old stomping grounds.

Visit Oconto on the World Wide Web at http://www.ocontonebraska.com/