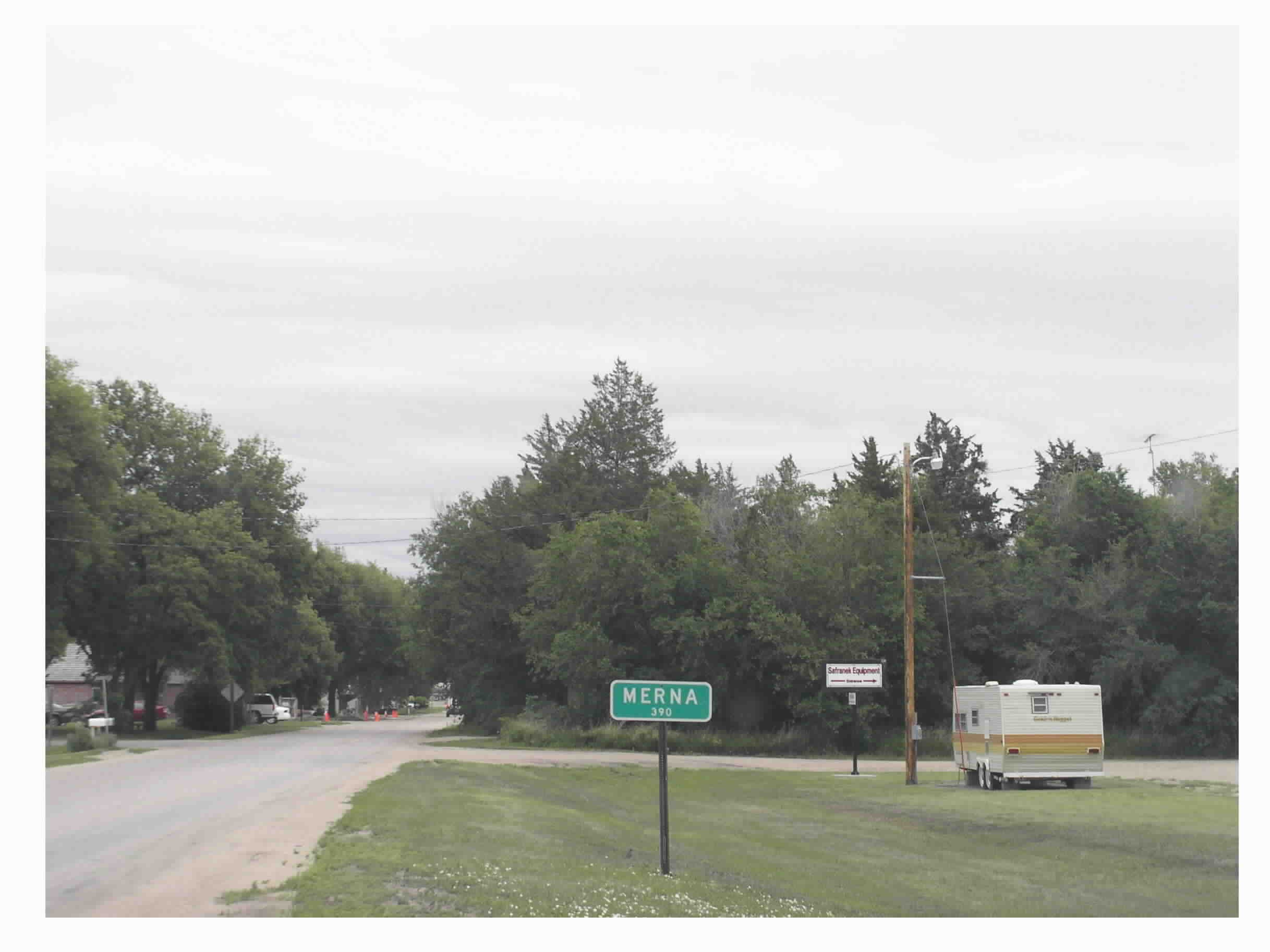 Merna, population 400, near the edge of the Sandhills, is a community of diversified farming and ranching. Located in Kilfoil Township of Custer County, its fertile valley is encircled by distant canyon hills and high table lands both east and west. Highway 2, 92, and 70, from the east divide west of town as they go to Alliance and North Platte, and the Burlington Northern Railroad skirts the east side of the town.

This area was called “Muddy Flats” when Samuel Dunning came in 1876, built a log cabin, and established a post office. In 1880 William Brotherton arrived, and heard that the Grand Island & Central Wyoming Railroad would build near his homestead. So, he opened a post office in his sod house. “Merna” was the name of Dunning’s seven-year-old daughter. (Dunning moved to Blaine County in 1881 where a town is named for him.)

In 1883 word was received that the railroad would lay its tracks two miles west of Merna, so the town — building and all — moved west. In 1886 the railroad, now the Burlington & Missouri River Railroad, decided to lay its tracks on the original route. So, the whole town moved back! The outlook for Merna was very positive, however, as new families arrived.

Many trades were represented. Leonard Wilson was a grain dealer. J.J. Standford advertized “flour and coffins for sale.” Ben Wells was the barber when not repairing clocks or broken finger rings. Doctors included: Lawrence Crawford in 1883, Albert Downing in 1885, and John Morrow in 1902, taking care of the ailments in the community, and listening to all the other problems while on their horse and buggy calls.

In 1886 Emerson Purcell’s newspaper, “The Merna Record,” noted, “…the town will sink a well and install a pump in the principal corner of the street for water and fire protection.”

Merna’s economy was thriving when the town incorporated in 1890. Trains, stopping for water, also brought mail, goods, and passengers. The first depot burned in 1898 but was rebuilt. In 1908 a town water system was in operation. In 1925 the Nebraska Power Company agreed to light the streets of Merna for the next 25 years for $50 a month. Electricity for pumping water was 4.5 cents per kilowatt.

The library was a gift of a former resident, Dr. James Benizer. The cornerstone of this handsome building was laid October 14, 1916.

Merna’s population peaked at 533 during the 1920s. An unusual incident later brought attention to the town. A man traveling across Nebraska was attracted to the name, Merna, and told his wife that should they have a daughter, they should use the name. This man was the father of the movie star, Myrna Loy.

School was first held in a home in 1884, then a sod house on the Sommer place. Two more schoolhouses were used before an impressive brick school was constructed in 1907, with additions made to the east side as more room was needed. A major catastrophe, a tornado, destroyed the older part of the school and many other buildings on May 2, 1930. By the 1960s, with an emphasis upon quality education, reorganization of area schools was in order. Dedicated in September 1969 the Anselmo-Merna District serves a 524-square-mile area. The 12 buses travel 480 miles a day, bringing students to the excellent educational complex.

Back when train service was good, the CB&Q had two passenger trains each direction every day. Students could get on the east bound train right after school, see their team play basketball, and return to Merna on the midnight train. The depot closed in May 1959. Later in 1970, the Burlington merged with the Northern Pacific and the Great Northern Railways, hauling only freight and coal.

Merna’s Centennial Heritage Days, July 4-5, 1987, brought many people back to town. After a parade led by Governor Kay Orr and Merna’s Senator Howard Lamb, people enjoyed reminiscing as they saw familiar faces and places. The town proudly showed off its towering grain elevator and big grain trucks lined up at Merna’s new trucking business. This plus other businesses and homes, new within the last few years. People marveled at the continued ingenuity and advancement of their home town of Merna.