Callaway is located in Custer County along the banks of the south Loup River. Our motto, “Heart of the Seven Valleys” points to the seven valleys surrounding the village. Incorporated on January 13, 1888, Callaway was named for Samuel R. Callaway, who was then vice-president of the Union Pacific Railway. Promoters of the new town, which was then the end of the railway, gave the town its name. Callaway now has a population of 637 people in its picturesque setting nestled among the hills between Lexington and Broken Bow.

Visit Callaway on the World Wide Web at http://www.callaway-ne.com/ 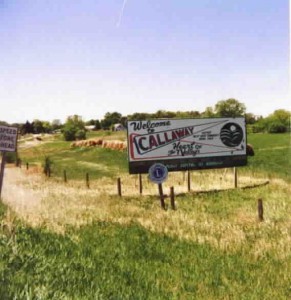