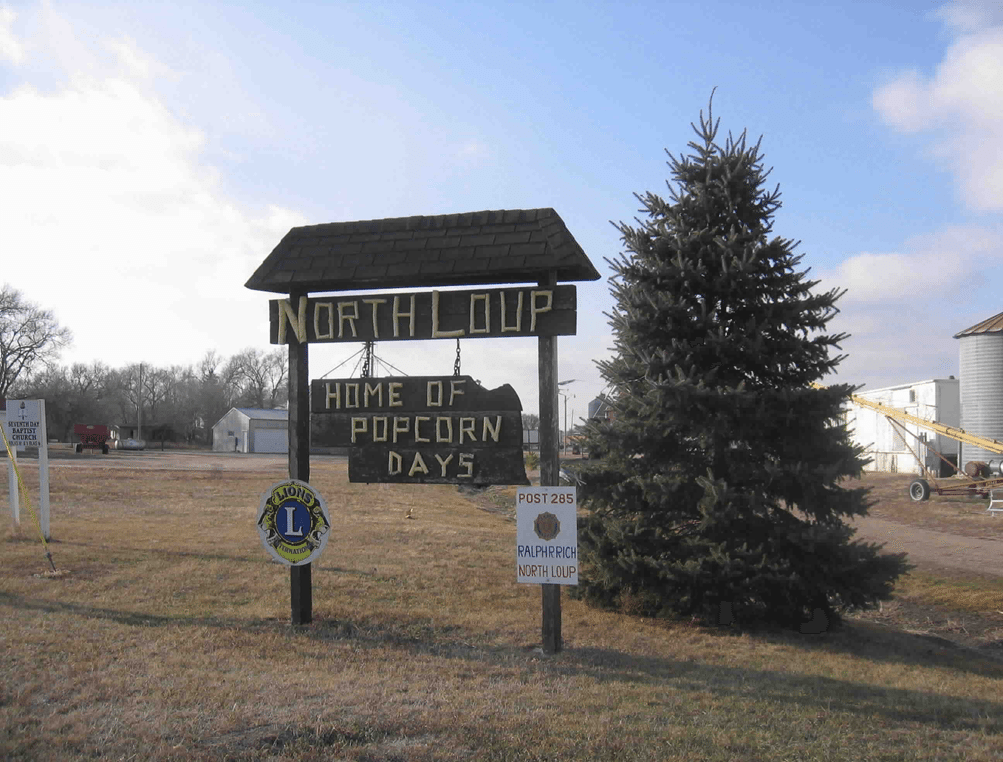 The settlement of North Loup was made by Seventh-Day Baptists from various churches within the denomination. A colony began organizing in the spring of 1871. In June a committee of four men (Rood, Prentice, Wellman, and Travis) was sent to find a location in Kansas or Nebraska.

They reached the North Loup Valley of central Nebraska on July 3rd, and after a short stay, returned to Wisconsin from which they came. The following October, C.P. and Herman Rood, John Sheldon, and Mansell Davis made a second trip. Sheldon and Davis filed homestead claims before returning. The winter was spent organizing the families who wanted to start a new home in the West.

In April 1872 the settlers began arriving. Many of the men came on ahead, without their families, but were joined by them in the fall. Their first homes were their covered wagons, but as soon as possible, they made more permanent shelters — either dug-outs or sod houses. Still later, they built log houses from trees which they found in what is now called “Jones Canyon” north of Burwell, about 40 miles away. There were no trees in the locality which they had chosen for their settlement.

Valley County was formed in 1873. The village of North Loup was laid out, named, and declared a town in 1894.

The Seventh-Day Baptists brought with them their own Pastor, Rev. Oscar Babcock, plus their own doctor and teacher, Dr. Badger, and his daughter Kate. The first Sabbath church service was held on the banks of the North Loup River on May 18, 1872, in a grove of trees two miles east of the present village of North Loup. They built a church of logs in 1894, which also served as a school. It was struck by lightning in 1914 and replace by the present church.
The Methodist church in North Loup was organized in 1885. Their first church, built in 1896, burned in 1911 and was replaced by the present structure.

Dr. W.J. Hemphill, who arrived in 1902, practiced until his death in 1949. He was succeeded by Dr. Murray Markley, who still serves the community.

Irrigation was developed after the drought of the 1890s. Along with irrigation came an introduction of a new cash crop — pop corn! North Loup soon became known as the “Pop Corn Center of the World,” and while it no longer holds that title, it still produces lots of pop corn. The pop corn was and is shipped by the carload to all parts of the world. A railroad into the town was completed in 1882, so transporting it to market was no problem.

The North Loup business men broached the subject of celebrating the town’s claim-to-fame. In 1902 they sponsored the first “Pop Corn Days,” and it has been celebrated every year since. It has grown from a one-day affair, to a three-day production, with exhibits, ball games, parades, the crowning of a queen, dances, programs, a carnival, and of course, free pop corn for everyone. It is considered to be one of the oldest continuous celebrations in the state.

The first school was a cave, dug in the banks of a creek. It was used for a very short time, until a log cabin was built. There were various other buildings over the years. The present schoolhouse was built in 1923 and is used as an elementary school. The North Loup School District has merged with a neighboring town, Scotia, with elementary school is held in North Loup and Junior High and High School in Scotia. Graduation of the first combined district senior class was held in 1959.

At one time there was a cheese factory in North Loup that also churned butter. With changes in farming, the number of dairy herds has diminished. The factory closed, and milk from the few remaining dairies is now hauled to Grand Island.

Our town’s population peaked at nearly 700 in 1930. Many things have changed so that today we are a community of 400 citizens.

Agriculture continues to be our main industry. With irrigation expanding in the entire North Loup River valley, farming is given some degree of stability. As long as we continue to raise food for the nation and the world, our little town will prosper.